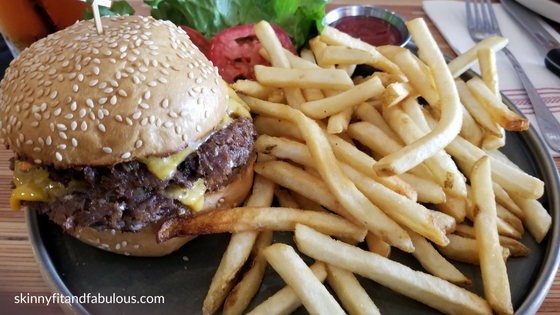 Spread the love
19 1    more
This website contains affiliate links and sponsored posts. As an Amazon Associate, I earn from qualifying purchases. I am also paid to write articles for brands. But no worries, all opinions are mine.

Why do people think it’s ok to make comments about a skinny person’s body or ask if we ever eat or “whisper” (cause we hear you) to your friend, “She needs to eat a burger or something!”  Cause we ALL know if someone said, “YOU ARE A FAT ASS” all hell would break loose.  And just so you know, we EAT and can probably eat you under the table.  Being told to eat a burger is offensive.  It is not taken as a compliment like so many people want to claim they mean.

It’s no secret that I’m a skinny lady.  I have skinny kids, and I have skinny friends.  I also have “average” size friends and “fat” friends.  When I meet people yes, I see their color, I see their weight.  Do I comment on it?  No!  Why?  Cause it’s rude!  There are so many body campaigns out here talking about being proud of your curves, and that big girls and guys need love too.  But it shouldn’t be at the expense of shaming other body types.  Some folks are missing that point.

The other day I had someone comment on my size.  My response was, “that’s right!  I’m Skinny, Fit and FABulous!”  In the past, I would’ve been crushed and try to figure out how I was going to gain weight.

The comments didn’t stop.  Yes, I said some things in my mind but refused to go there to make them stop.  Instead, I turned sideways to let my body language speak my feelings.  It continued, so I finally said, “yes, I’ve been skinny all my life, and after having three beautiful children I’m still skinny.”  Yeah, there was a little attitude in my voice at this point.  My husband picked up on my frustration, as he told me later that day that he thought it was about to get ugly.  Me, being the person I am, I’m not going to retaliate with hurtful words.  It does no good, and that’s just not how I roll.  And my kids were sitting there.  Honestly, that’s where the most hurt came in for me.  I teach our girls to love their bodies, not react to ignorance, but to always speak up for themselves.  At the same time, I wasn’t sure how the other person would respond and refused to have a full-blown confrontation at that moment.

An opportunity later presented itself for me to educate about those comments.  The response was the normal one, “I was just playing, didn’t mean anything by it.” “I’m just jealous.”  Why didn’t you call me a fat ass?”

Hmmmm…..we all know if the response back was, “YOU’RE A FAT ASS” that I would’ve been the biggest B of all time and now they become the victim.  There was an apology made and accepted.  And the best part….by talking it over, the individual had their eyes opened and now understand how hurtful their words may be received.

Did Their Comments Hurt My Feelings?

No, it didn’t hurt my feelings (it used to), but knowing there are others who are still learning to love their bodies and knowing that there are some skinny folks who won’t think twice about letting it flow, I have to let others know how hurtful it can be.  Hopefully by sharing my personal stories, it will help those on the receiving and giving end.

Do people make comments about ALL body sizes?  Yes!  However, many people do not think those comments affect skinny people.  Yo, we have feelings too.  And to many’s disbelief, being skinny isn’t necessarily a GLAMOROUS lifestyle.  And heck, especially now with the direction of many of the body image campaigns out there, it’s prime season to torture skinny folks.

I know someone is reading this saying, “oh, poor little thing.  Whining about being skinny and not wanting people to speak the truth”.  You’re right; there’s nothing wrong with someone speaking the truth.  Saying that someone is skinny isn’t what’s rude.  However saying, “OMG, you’re so skinny, you need to eat” is.  Cause once again, if I said, “OMG, he/she is such a FAT ASS, he/she needs to skip a few meals” I’m body shaming and a horrible person.  For some reason, it’s a double standard, and it shouldn’t be.

There’s always going to be rude people in the world.  There will still be people who make rude comments about your body (this goes for all sizes), hair, skin, etc.  But my message is to bring awareness of skinny shaming and how many claim their comments are meant to be compliments, jealousy or not knowing it’s hurtful.

So, let me end by saying this…..your words matter.   Even though you say you welcome the snapback of “FAT ASS” that response would be hurtful, and you wouldn’t appreciate it.  Just like many skinny people don’t appreciate skinny comments, nor the dismissal of their feelings.  Saying that skinny is what society glamorizes as beautiful doesn’t excuse you for your actions and words (we will talk more about this later) toward an individual.  Usually that individual being someone that you claim to love.  You see, when you make an excuse about what society upholds as beauty as a reason to hurt, shame or dismiss, that’s a significant problem.  I, nor any other skinny person has done anything to you for those comments to be said repeatedly.  Remember, your comments hurt and there’s someone who struggles daily with being skinny.  The struggles may be different, but the hurt is the same.

Last but not least, LOVE YOUR BODY.  Many skinny people have NO control over their size.  No matter how much we eat, we may not gain weight.  And hey, your words may cause more damage than good.  Think before you speak.

BUT….if there’s a skinny person in your life who seems to be losing weight and becoming unhealthy, this is when you need to reach out in a caring way.

This post was originally posted July 23, 2018, to my site Skinny, Fit and Fabulous.  A few updates have been made.

Some of you know I had a separate site talking about body shaming from the skinny prospective.  As I worked on SFF and MACS, it was becoming difficult to manage both.  So, I’m taking the leap of bringing SFF to this platform.  Skinny is part of my life, part of sharing my story to help other women and youth.  Hope you enjoy this part of my story and I hope it helps someone.